I bought this cross body for my trip to Europe. I needed something that would work for Ryanair's personal bag limitation, but also be big enough for my tablet, passport, and anything else I'd need on the flights. I also wanted something cute enough to carry around the cities we were visiting. This bag is perfect. It had plenty of room for my Kindle HD 8", portable charger, wallet, and passport, with room to spare for anything else like headphones, ear plugs eye mask, ect. You can see in the photos I have a few things in it and there alot of room for more. I like how it not only has the flap closure, but it also zips, making it safer from pickpockets.
The material is super soft. I expected a fake, stiff feeling purse, but it feels like broken in leather! The dark brown also looks like real leather as it has a variation of light and dark coloration. The stitching is nice and even and looks high quality.
The inside of the purse has one large main pocket, a zipper pocket, and another small open pocket. There is also another zippered pocket on the back, and even the front flap can be used as a pocket. (I would be careful about putting anything valuable in the flap because if the zippers accidentally come apart, stuff can fall out. But I imagine maybe if you get a small lock or clip to secure it, it would be safe)
Overall I'm extremely happy with the purse, I wish I could have seen the other colors in person. I'm curious what they all look like.I'm in love! ;) Really does look and feel like genuine leather- it's very soft, including the strap which is great. I'm super picky about how straps sit and feel, and this one exceeds my expectations by a long shot. So easy to adjust, definitely long enough to wear as a cross body even if you want it sitting lower on your hip (at least for me, I'm 5'6") and the best part- if I want to wear it on my shoulder it doesn't slip off!! I swear about 80% of shoulder bags just don't want to stay on my shoulder, and this one just stays put- I even swung around and bent over a bunch to test it, lol! The size: it was just a tad bit smaller than I was hoping it to be, but it still holds my essentials and then a tiny bit more. I'm planning to use it as my general going around bag when I travel (as well as here at home) so I tested it with my passport holder, small travel wallet, cell phone, keys, little cosmetic pouch, glasses, earbuds, and a couple of snack bars and it fit with a little space leftover (it could probably just fit a book or kindle, too) The inside pockets are a little small- I couldn't fit either my little wallet or my phone in either if I wanted to zip it- but the outside pocket on the back fits either one or the other which is nice. One of the inside pockets is very soft, so that's where I put my glasses. The pocket on the flap is easy to open/close but I probably won't use it, just because it seems like someone could more easily unzip it and grab whatever. The magnetic snap is pretty strong- I have to give it a little more of a tug than I was expecting to, but that gives me more security while traveling I suppose. And at least on mine, it doesn't seem to want to snap shut on it's own- I have to guide it manually- so I'll just leave it undone unless I want it more secure, which is fine for me. One last thing- the tassels: they are pretty high quality! I'm surprised- they also look and feel real, and they have a little bit of heft to them, unlike others I have bought from ebay which were light and cheap and fell apart immediately. I also noticed these actually have a tiny screw that is holding the tassel in- I don't think they are going anywhere! I'm so happy to have found this bag, for such an amazing price. I'm definitely planning to order the dark brown next, and probably the green also! :) (Pics coming soon- having some uploading issues ;) Hopefully the pics help to show some of the things I've mentioned. The one with the crossbody isn't set to it's longest length and could go a little further.)I am very happy with this bag! The charcoal grey came exactly as advertised and the material feels supple but durable. The straps adjust easily and hold well. I can fit my large wallet inside with room to spare. My touch-up cosmetics are in the inner pouches and it also easily holds my small hair brush and comb. I never really intended to use the flap for much so it just houses lip balms and a pocket knife. Much more and it would definitely bulge awkwardly. However, this isn't an issue for me hence the 5 star rating.UPDATE: After carrying it for a week, it has been sitting in a drawer. I wasted my money. I’ve discovered I don’t like it. The tassels are too big. I don’t like that the interior of the purse is not secured to the inside so every time I pull something out of my purse, I’m pulling the interior with it. Also, I don’t like that it sags once I have all my items inside. Unfortunately, I’ll be donating this purse since it’s too late to return.

Received and LOVE it already because of the size and style. I didn’t even realize it’s a PETA and vegan approved product. It has an unusual odor that I’m hoping dissipates soon. I have a small charcoal gray crossbody I love but I needed a couple inches bigger for day to day use. This is the perfect size. My wallet, tiny makeup bag, keys, cell phone and gum packet don’t feel jammed in like my other purse. Two large tassels are a bit much but they give it style. I just zipped the flap to my left so the tassels aren’t in my way.I am very particular about purses (I love donney and Bourke) Buy I needed something affordable and cute, I was very nervous as I been looking for a purse that doesn’t look cheap and I haven’t found one in department stores, I thought giving amazon a try an I’m very happy I did, this purse doesn’t look cheap at all, it is perfect size for a medium purse , I’m not sure I will keep the little hanging tassels on but we'll give it a try 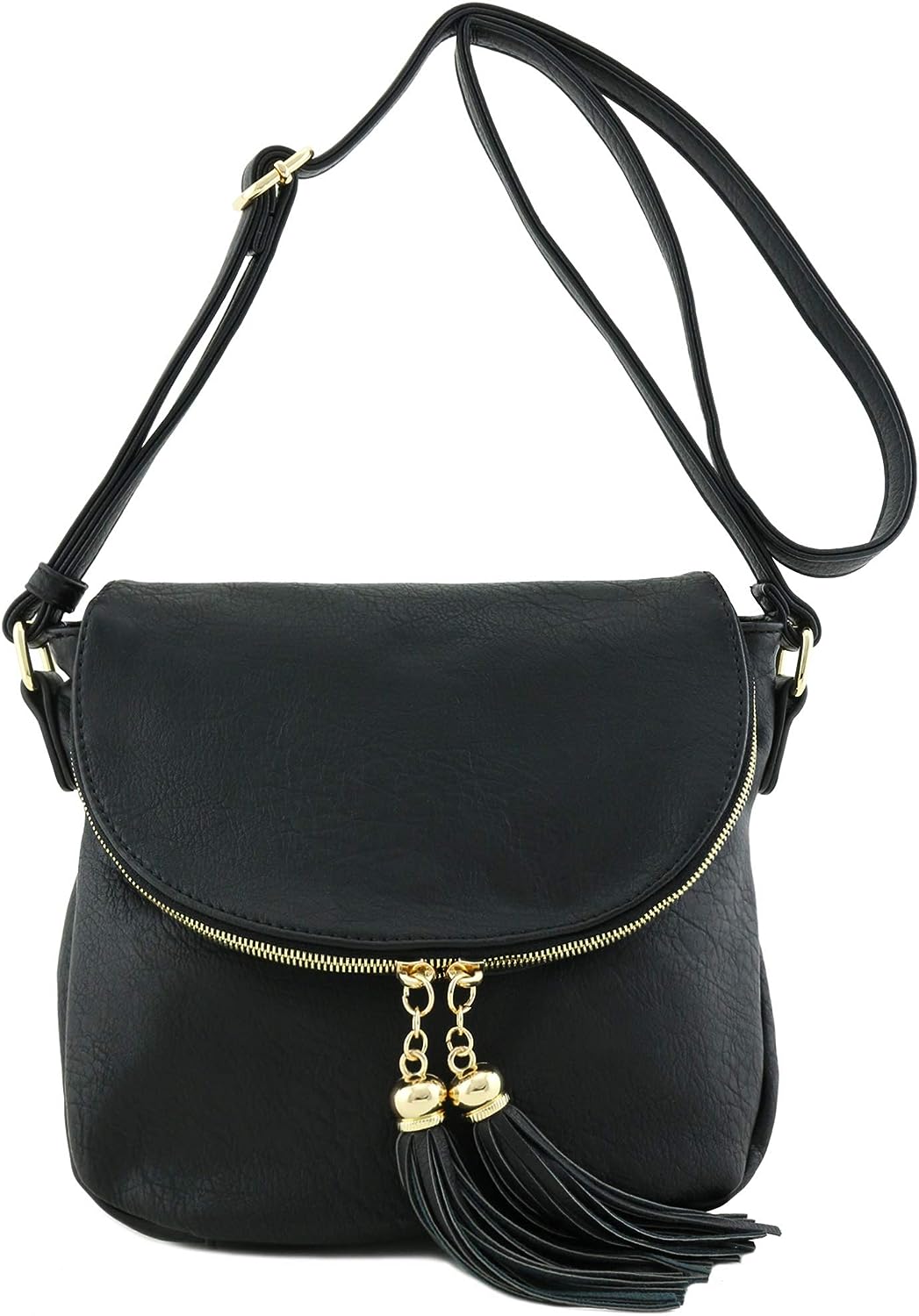 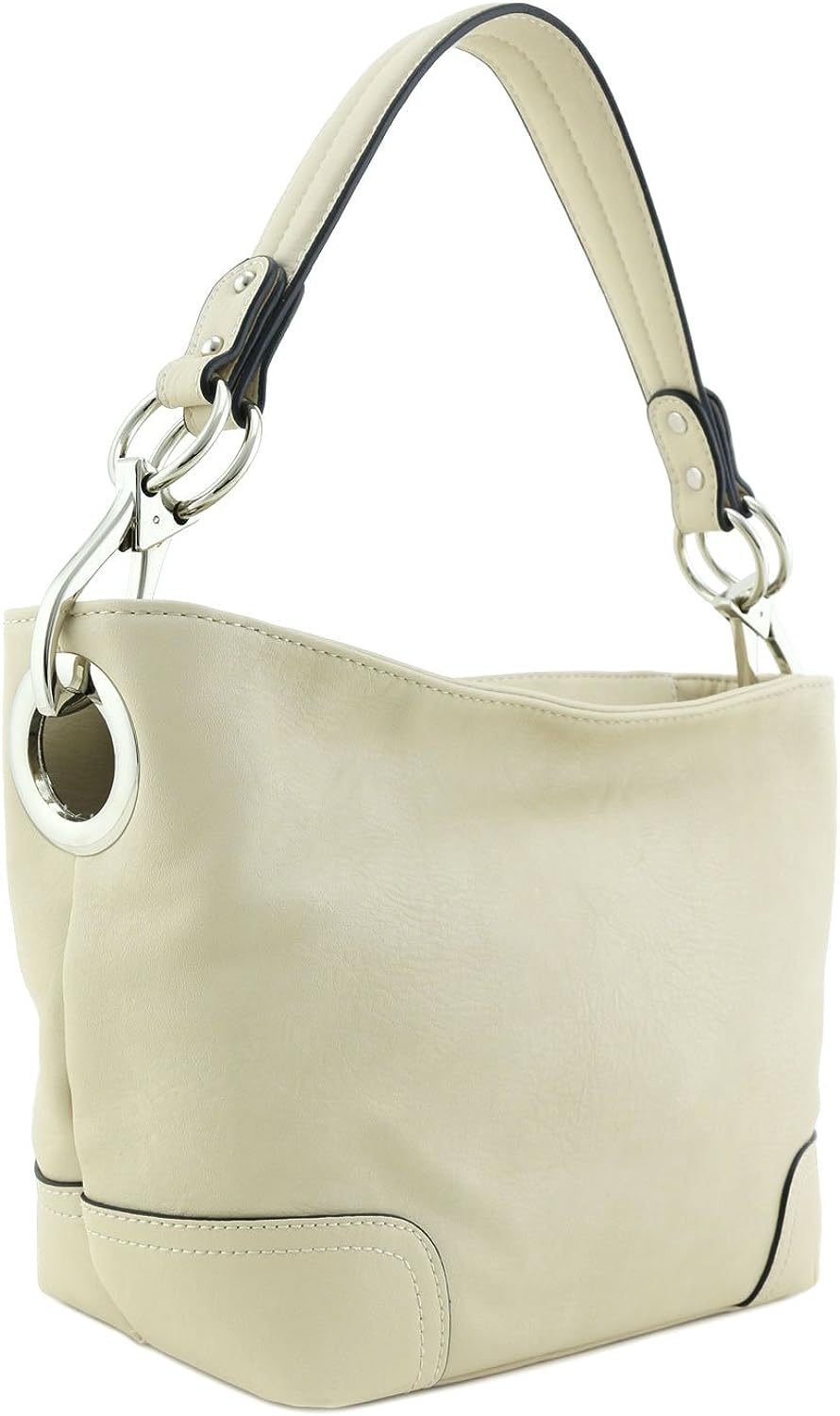 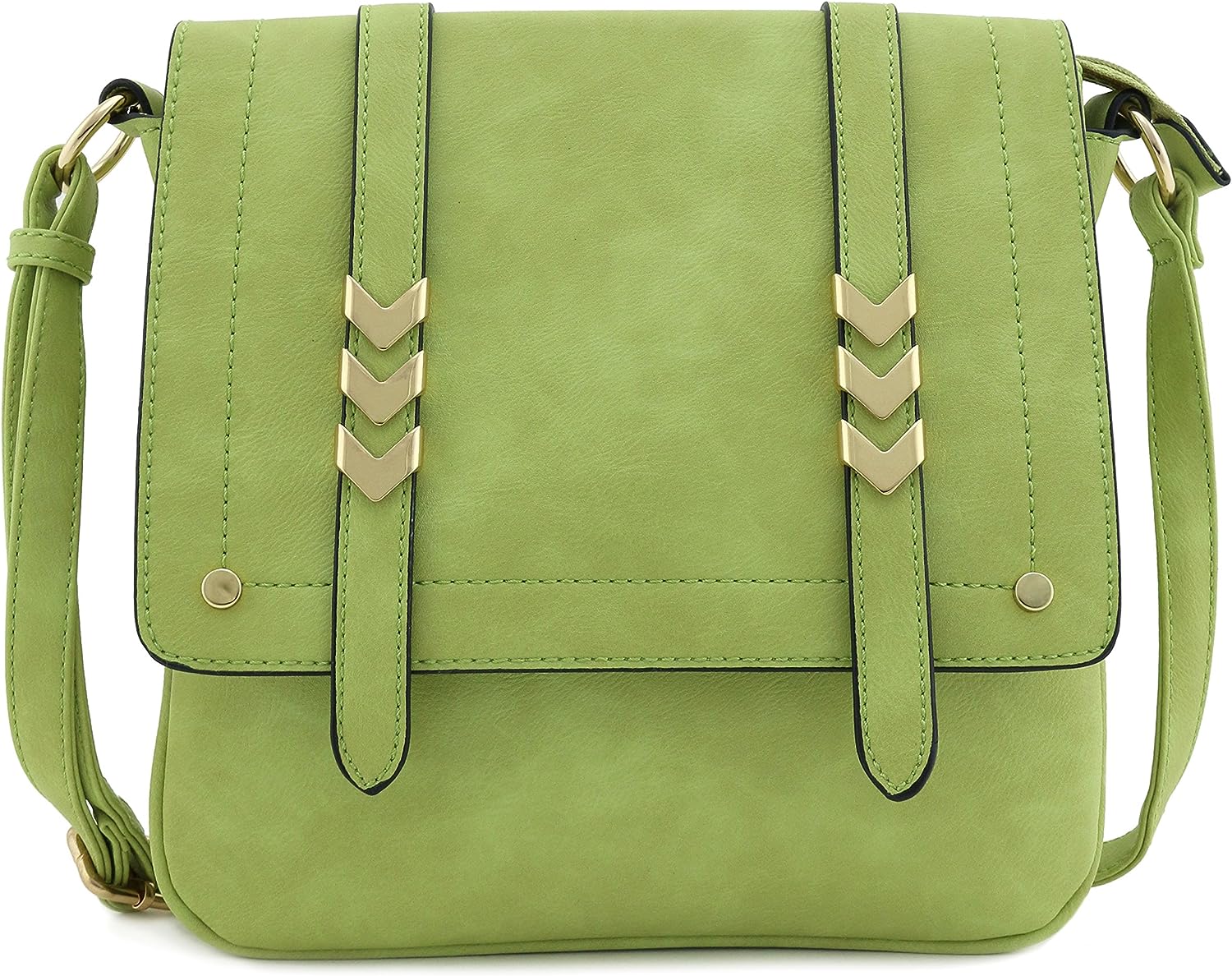 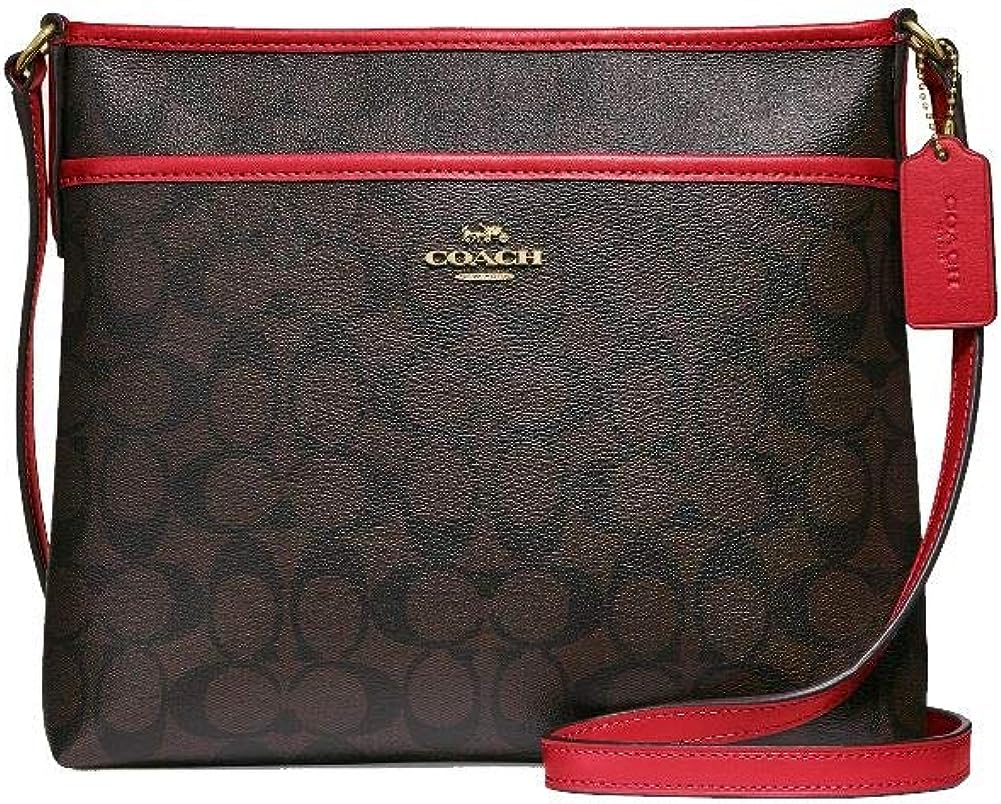 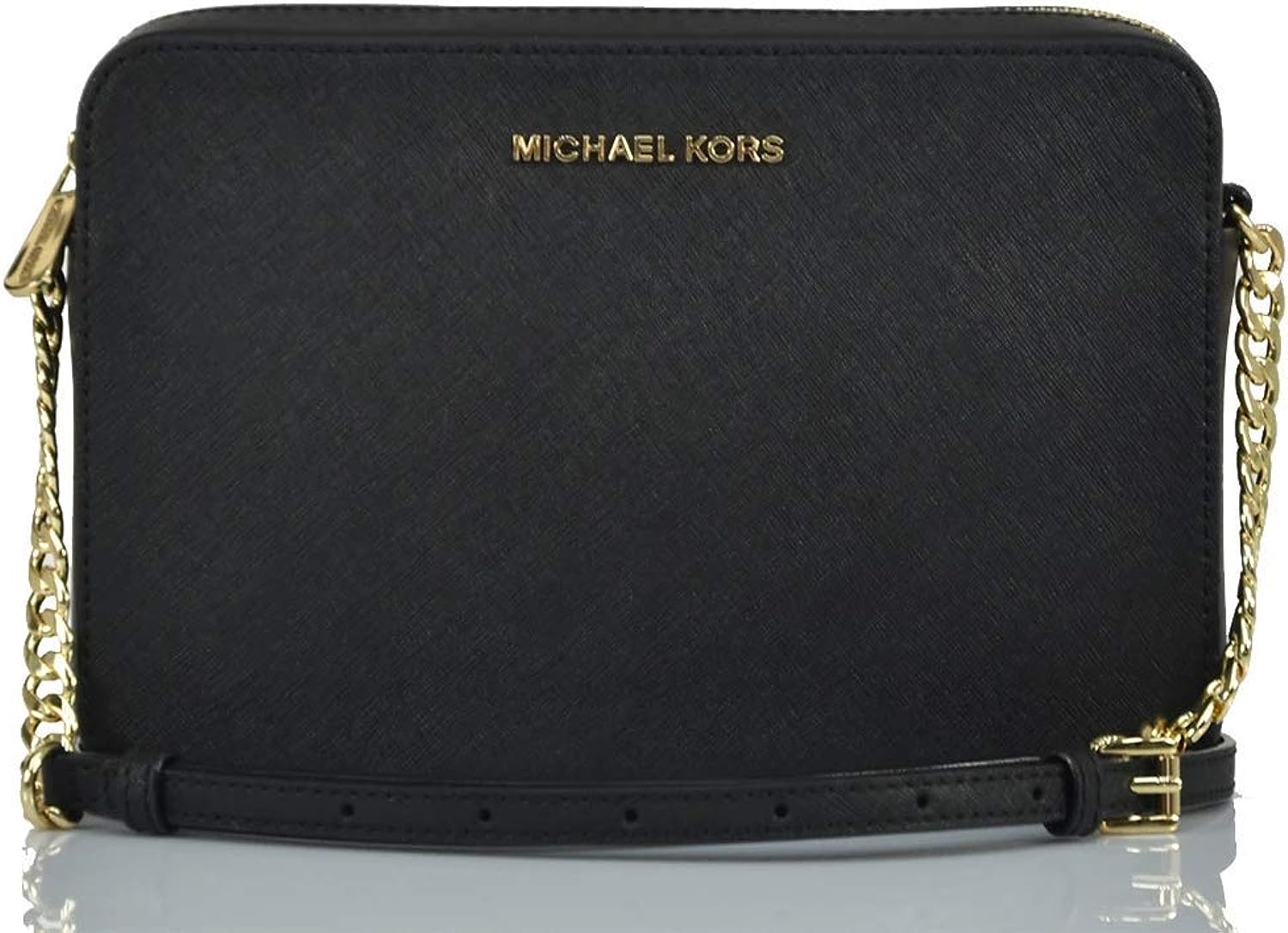 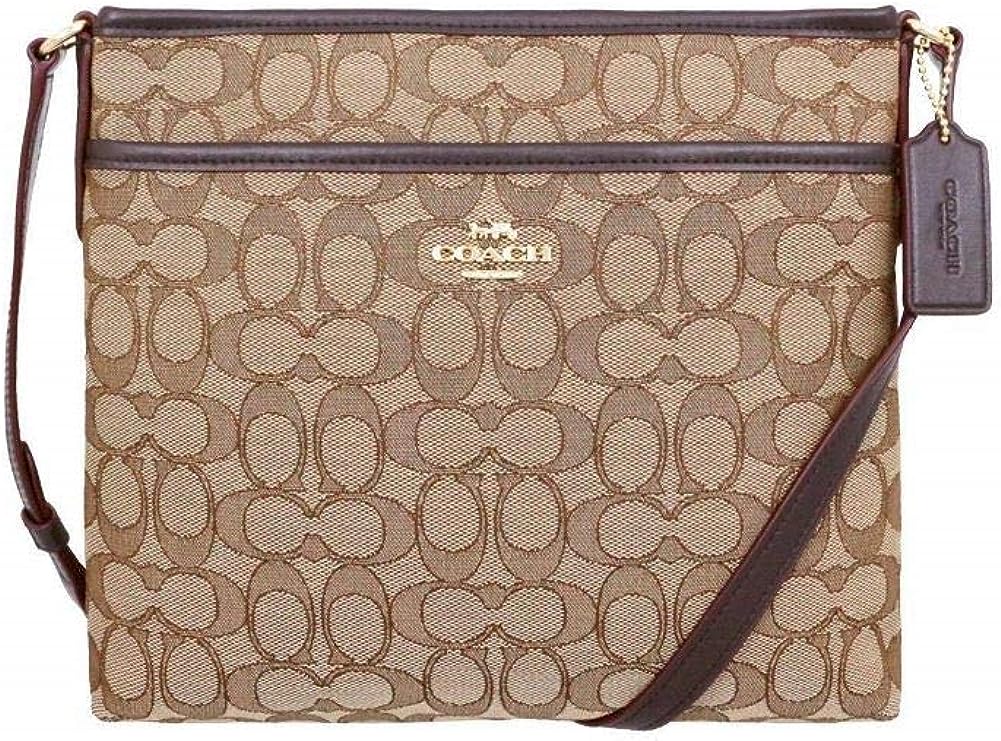 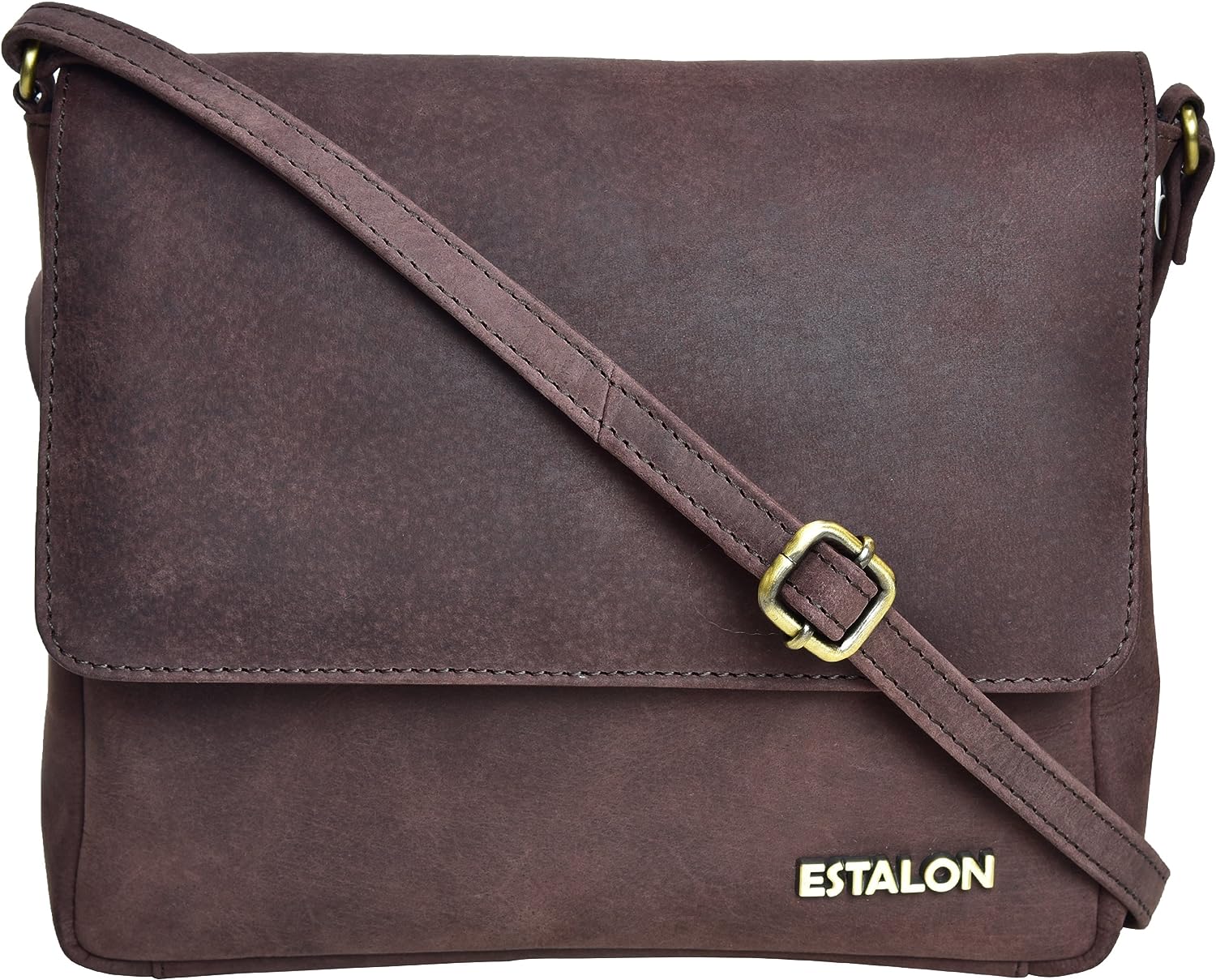